The LCDHD is governed by a 30-member board of directors with representation from each county’s local board of health. The board is comprised of county judge executives, physicians, nurses, dentists, veterinarians, engineers, optometrists and citizen members. The board employs an executive director and medical director to manage the day-to-day operations of the department. At our peak, we had approximately 300 staff members employed in the 10 county health centers and administrative offices located in Somerset.  With the challenges of the down-turned economy, we now operate at about 200 employees. 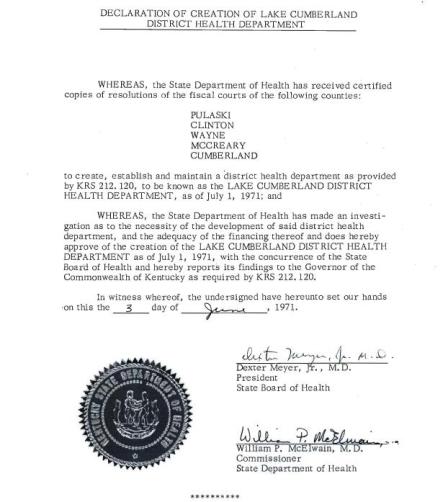 Amy Tomlinson became the Director of LCDHD on June 14, 2021.  She had been the Public Health Preparedness Manager since 2013.   Amy started her career with LCDHD in October, 2004.  Amy earned a Bachelor’s degree in Community Health Education, and a Master’s Degree in Public Health from Western Kentucky University.  Prior to working for LCDHD, Amy worked at the University of Kentucky in the Kentucky Injury Prevention Program as a Regional Injury Prevention Specialist.  She covered the south-eastern portion of the state including the Lake Cumberland region.

Patrick Bell was the Lake Cumberland District Health Department (LCDHD) Director from 1982 until his retirement in 1994.  During this time, the Lake Cumberland Health District expanded from five to ten member counties.  He has also served as the Executive Director of the Lake Cumberland Area Development District, and the McCreary County School Board’s Superintendent.  He graduated with a bachelor’s degree from Eastern Kentucky University with a major in Commerce and later achieved a Master’s in Administration.

David Upchurch was the LCDHD Director from 1995 until his retirement in 2000. Mr. Upchurch began his employment with LCDHD in 1974 as the Adair County Sanitarian (Environmentalist).  In 1978, he took on the additional duties of Administrator for the Adair County Health Department including supervision of the employees and program plans.  He achieved a bachelor’s degree from the University of Kentucky where he majored in Business Administration and Economics. He also served in the U. S. Army for 4 years.

Shawn Crabtree was the LCDHD Director from January 2001 to July 2021.  He also served as a counselor, County Manager, and Quality Improvement Director for the ADANTA Group.  He graduated with a bachelor’s from Western Kentucky University where he majored in Social Work and Psychology.  He later achieved a Master’s of Social Work from the University of Louisville and a Master’s in Public Administration from Eastern Kentucky University.