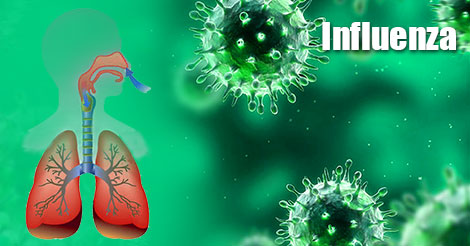 According to the Centers for Disease Control and Prevention (CDC), more than 200,000 people are hospitalized each year from complications of influenza (flu) and an average of 23,000 die annually. Flu seasons can vary in their timing, severity, and duration from one season to another. Most of the time flu activity peaks between December and February, although activity can last as late as May. The 2015-2016 Kentucky flu season started a little later than the previous three flu seasons. This is one of the later season peaks on record.

Select and De-select years by clicking the legend options.

Influenza is a viral illness that is spread by respiratory droplets when a person sneezes or coughs, it can be mild or severe depending on the strain.  The very young, the elderly and pregnant women seem most susceptible to severe disease and possible death.
Discussion
During the 2019-2020 influenza season, CDC estimated that influenza was associated with 38 million illnesses, 18 million medical visits, 405,000 hospitalizations, and 22,000 deaths. The influenza burden was higher in young children (0-4 years) and adults (18-49 years) compared with a recent season with the 2017-2018 season, a recent season with high severity, and provides evidence to support how severe seasonal influenza can be at any age.
Flu can be prevented or its symptoms minimized through an annual vaccination. Unfortunately, we need an annual flu shot as the virus frequently mutates and the vaccine needs to be updated annually.  Research is ongoing on producing a universal flu vaccine that would not need to be given annually.