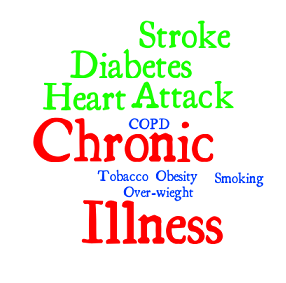 Please read footnotes, titles, and explanations with each chart for the source(s) and explanation of data.  It is important to note that some of the data presented below can not be taken as absolutely definitive since a minimum of 15 cases are required to calculate a stable age-adjusted rate. Considering the small populations in our rural counties, in several instances, the age-adjusted rates displayed below were calculated with fewer than 15 cases.  Also, where the information is left blank, counts/rates were suppressed, likely due to having fewer than 5 reported cases within the specified category.

Select the category by using the filter below. Select and De-select counties by clicking the legend options.

Coronary Heart Disease (CHD) is the leading cause of death in the United States and Kentucky, with Kentucky ranking 9th in the nation ( CDC 2017). Common causes for CHD are mostly lifestyle choices such as tobacco use, lack of fruits and vegetables and excessive red meat intake, and lack of physical activity, with consequences such as obesity, diabetes and hypertension adding to the problem.

The Lake Cumberland District has higher rates of CHD deaths than Kentucky and the United States, with McCreary County leading the way with rates twice the national average. Over the last decade deaths have trended down for seven of our counties, however, for Green and McCreary counties they have increased, while Wayne Co has plateaued. Kentucky also has higher stroke deaths than the national average.  Five if our counties ( Adair, Casey, Clinton, Cumberland, and Green) are seeing decreases over the last decade, while the rest have plateaued.

Death rates are a function of reporting the disease on death certificates and improvements made in the treatment of the disease. It would be interesting to ascertain if the decreases are due to lower incidence rates or improved treatment of CHD and stroke prevention.

Kentucky leads the nation in smoking rates, and McCreary County has the highest rates in our district; so, public health interventions to lower smoking rates would have a great impact on preventing cardiovascular disease. Appropriate management of diabetes and hypertension would also be beneficial. The LCDHD provides smoking cessation services and diabetes management classes.

Finally, heart disease, stroke and diabetes are all illnesses that can be largely prevented by eating healthy, exercising regularly, and avoiding tobacco products.

The following pages are available under "Chronic Illness":

Please confirm deletion. There is no undo!