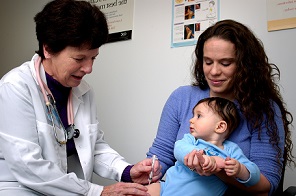 World Immunization Week is an annual observance to highlight the importance of protecting infants from vaccine-preventable diseases and celebrate the achievements of immunization programs and their partners in promoting healthy communities. Diseases such as smallpox, diphtheria, polio, measles and whooping cough were mostly wiped out in the US through excellent immunization programs.  Unfortunately some of these are coming back as more parents choose to withhold vaccines. Whooping cough and measles outbreaks in recent years exemplify this problem.

Whooping cough (pertussis) is a very contagious disease that can be deadly for babies. It is spread from person to person, usually by coughing or sneezing while in close contact with others. Babies are most at risk before they are fully immunized themselves, so those caring for them should be immunized. Tdap vaccine (tetanus, Diphtheria and Pertussis) can be given to anyone 7 years and older. Also pregnant moms-to-be should be vaccinated during their pregnancies at around 30 weeks gestation so as to maximize passive antibody transfer to the infant. The level of pertussis antibodies decreases over time, so Tdap should be administered during every pregnancy in order to transfer the greatest number of protective antibodies to each infant.

You may be hearing a lot about measles lately, and wondering why it has returned what you as a parent need to know about this disease. CDC has put together a list of the most important facts about measles for parents. www.cdc.gov/measles.  Measles can be serious. Some people think of measles as just a little rash and fever that clears up in a few days, but measles can cause serious health complications, especially in children younger than 5 years of age. There is no way to tell in advance the severity of the symptoms a child may experience.

Some of the more common measles symptoms include high fever, cough, runny nose and red, watery eyes. Measles rash appears 3 to 5 days after first symptoms.  Measles is very contagious and spreads through the air when an infected person coughs or sneezes. It is so contagious that if one person has it, 9 out of 10 people around him or her will also become infected if they are not immunized. An infected person can spread measles to others even before knowing he/she has the disease—from four days before developing the measles rash through four days afterward.

Measles was declared eliminated from the U.S. in 2000 thanks to utilization of a safe and effective vaccine. That means that the disease is no longer constantly present in our country.

Worldwide, an estimated 10 million people get measles and 110,000 people, mostly children, die from the disease each year. Even if your family does not travel internationally, you could come into contact with measles anywhere in your community. Every year, measles is brought into the United States by unvaccinated travelers (Americans or foreign visitors) who get measles while they are in other countries. The best protection against measles is measles-mumps-rubella (MMR) vaccine.

If your family is traveling overseas, the vaccine recommendations are a little different: If your baby is 6 through 11 months old, he or she should receive one dose of MMR prior to leaving.  If your child is 12 months of age or older, he or she will need 2 doses of MMR vaccine (separated by at least 28 days) before departure.